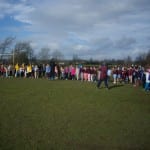 The cross country took place at the college fields on Thursday 26th February and many schools attended. Before the racing we did plenty of exercise, and then walked the course to see how far and where we were running.

As we started the races the atmosphere was unbelievable, with people encouraging each other and shouting for their team/school. Because of the noise it made it more exciting not only for the people watching, but for the children taking part too.

“We were astonished and thrilled with our school performance. When they got hurt or tired they had the strength to keep on going until they had finished the race. Their attitude was also amazing and we will definitely take them again,” said Mrs. Sayers and Mr. Rudd.

By Piotr and Jack

Bishop Hogarth Catholic Education Trust is a company registered in England | Company Registration No: 07808732 | Registered Office: Carmel College, The Headlands, Darlington, DL3 8RW, England. Tel: 01325 254525 | bhcet.org.uk.
We use cookies to ensure that we give you the best experience on our website. If you continue to use this site we will assume that you are happy with it.OkRead more