Home / Community / Our Community Links / The History of St. Wilfrid’s

Before St. Wilfrid’s Church was built, priests used to come from Darlington and say Mass in private houses. If no priest could come then people walked to Croxdale (about 7 miles) to attend mass, a journey taking about three hours each way!

Then, in 1842 Bishop Auckland got its first priest, Father Luke Curry who used to say Mass in a house in Bondgate. The next priest, Fr James Gibson, bought the land for the church and the priest’s house. The church was started in 1845 and opened in 1846 on the feast of St. Wilfrid. It cost £1000, which was a lot of money in those days! 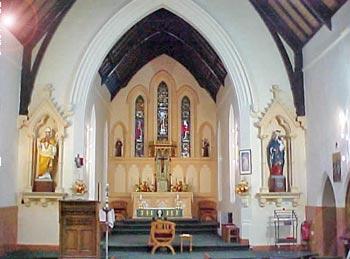 In 1846 Bishop Auckland was beginning to grow. Previously it had been a small village but as more and more coal mines were opened around the area people began to settle here. The Irish potato famine also happened from 1845 and this led to many Irish Catholics settling in Bishop Auckland. In 1857 the church was extended by 14 metres and the big gallery was built to accommodate the rising Catholic population of the town.

The priest’s house was built in 1867. Before that the priest had lived at No 1 Hexham Street. This house became a convent after the priest left.
The first St. Wilfrid’s School was built in 1861 on land next to the church. It cost about £900. (Our present school cost over £100,000 to build.) This school was eventually demolished, but a stone cross from its wall was kept and is currently located on a bank in our playground.

Some years ago a small bell turret at the west end of St Wilfrid’s Church became unsafe and was demolished. The bell used to be rung before each Mass and at the Consecration of the bread and wine. The bell was saved and it now stands in our entrance foyer.